Warren E. Rollins studied art at the San Francisco School of Design and was awarded the Avery Gold Medal for Excellence in Painting in 1882. Following his studies he assumed the position of assistant director of the school. In 1905, Rollins conducted research in preparation for a commission – two historical paintings for the Lewis and Clark Exposition. The information he learned sparked the artist’s interest in painting Native American subjects.

That same year, Rollins began the first of many sketching expeditions from a studio at the Hubbell Trading Post in Ganado, Arizona. He painted the everyday events and sacred ceremonies of the Hopi tribe, and Pueblos such as Zuni, Acoma, and Laguna. Rollins was the first artist to hold an exhibition of his work in Santa Fe. The show opened in June of 1910 and was held at the Palace of the Governors. Rollins lived and taught in Santa Fe for about 12 years, beginning in 1919. Often called the “dean” of the Santa Fe school, Warren Rollins devoted his life to “painting the Indians of the Southwest from the inside out.” 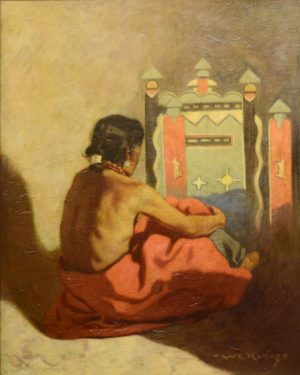 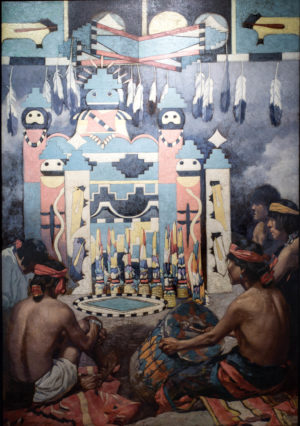 The Altar of the Gods