Ward Lockwood studied at the Pennsylvania Academy of Fine Arts, and he also lived and painted in France from 1921 to 1922. The artist became proficient in a range of different media, including watercolor, oil, and lithography. He won many awards throughout his career and was the subject of more than forty five one-man exhibits. In 1926, Lockwood followed Kenneth Adams, a member of the Taos Society of Artists, to New Mexico. During the 1930s, the artist worked on public murals in Taos with Emil Bisttram, Victor Higgins, and Bert Phillips.

In addition to working as an artist, Lockwood also became a well-respected art teacher at the University of Texas-Austin and the University of California-Berkeley. In San Francisco, he exhibited with the Abstract-Expressionist painters of the San Francisco Art Association, but continued to spend part of each year in Taos, particularly for his summer retreat. After Lockwood retired from teaching he returned to Taos, where he died the next year. 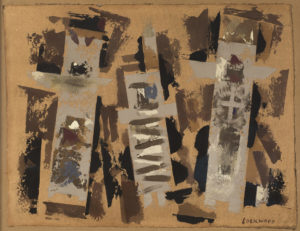 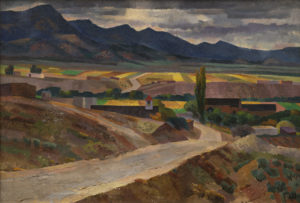