Walter Mruk traveled west with his colleague, Jozef Bakos, from his home in Buffalo, New York. The two grew up in Buffalo’s Polish immigrant community and attended the Art School of the Albright Art Gallery together. When their teacher, John E. Thompson, moved to Denver in 1918, the pair followed him there to continue their studies and begin their careers.

Shortly afterward, Mruk took a job as a forest ranger at Rito de los Frijoles (present day Bandelier National Monument), and Bakos obtained a teaching position at the University of Colorado at Boulder. In 1920, they made their way to Santa Fe after learning of the small city’s reputation as an artist’s destination. Almost immediately they were able to arrange an exhibit of their paintings at the newly opened art museum. The reviews were quite favorable. In 1921, Mruk and Bakos, with three other young artists (Will Shuster, Willard Nash, and Fremont Ellis) came together as Los Cinco Pintores, a group of five young artists dedicated to modernism and such democratic ideals as “bringing art to the people.” Of the five artists, Walter Mruk remained in Santa Fe the shortest length of time. His departure in 1926, though amicable, led to the dissolution of Los Cinco Pintores. Mruk’s last exhibition in Santa Fe was in 1927. In the late 1920s, Mruk moved back to Buffalo and died there in 1942. 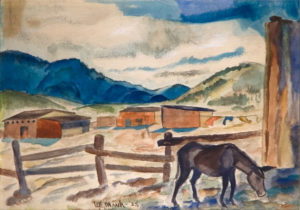