Thaddeus Welch was a painter of landscapes and portraits. While he depicted diverse subjects in both Europe and the United States, he is now best known for his work depicting Marin County, California. As a boy, he crossed the Great Plains with his family who settled in Oregon. Later, after moving to California, he studied art at the California School of Design in San Francisco. He earned a scholarship to study in Munich, Germany, in the 1860s, and remained there for several years. In that time, he became a close friend and painting companion to Frank Duveneck and William Merritt Chase.

During the 1880s and early ’90s, Welch roamed the United States working on various art projects. In 1889, he visited Santa Fe, New Mexico, where he painted colorful views of the adobes as well as Native American portraits. One of his closest friends during this time was John Twachtman, the American Impressionist. Towards the end of the 19th century, he settled in Marin County, California, and in 1904, he and his artist wife, Ludmilla, spent a season painting in Yosemite National Park. 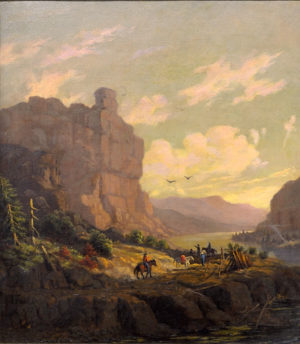