Born in Hungary, Sandor Bernath immigrated in his youth to the United States. By the early 1920s, he had begun to establish himself within New York art circles. Little is known about Bernath’s education and early training, although it is thought that the artist had traveled and studied abroad. Like many of his peers, Bernath worked as a teacher and illustrator to support himself. In his spare time he retreated to the villages of Maine and Massachusetts, where artist communities had sprung from the modern artist’s desire to study natural forms. By 1923, Bernath’s fascination with these forms becomes apparent with the complete shift in focus of his subject matter from the sights and scenes of his urban surroundings to the land and seascapes of New England. As we know from his work, he was also drawn to explore the Southwest, including Taos, New Mexico. 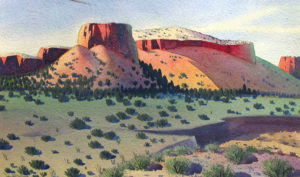 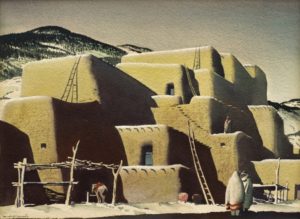