A self-taught painter, Rebecca Salsbury James was born in London to American parents who were traveling with Buffalo Bill Cody’s Wild West Show. Raised in New York City, James was educated at the School of Ethical Culture. In 1922, she married photographer Paul Strand, and she and her husband were active participants in the group of artists who showed their work at Alfred Stieglitz’s gallery. There, they became close to artists Georgia O’Keeffe, Marsden Hartley, Arthur Dove, and Gaston Lachaise.

After divorcing Strand, the artist moved to Taos, New Mexico, where she fell into the orbit of Mabel Dodge Luhan and Frieda Lawrence, wife of noted English author D. H . Lawrence. James subsequently married William James, who operated the Kit Carson Trading Post in Taos, where she lived until her death in 1968. 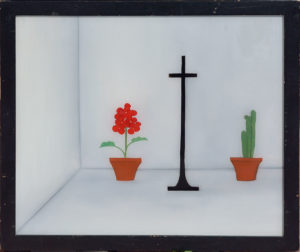