Ralph Meyers was a well-known early Taos Indian trader, forest ranger, and painter who, without any training, did some remarkable New Mexican genre and landscape paintings. He was, as Leon Gaspard called him, one of the finest colorists of the period. Fechin and other contemporaneous artists of the Taos art colony also held him in high esteem. Meyers grew up in Denver, where he appeared to have been heavily influenced by a number of prominent Western artists and frontier personalities. After numerous visits to the Southwest at the turn of the century, he moved to Taos in 1909, taking a job as a fire guard on Taos land. He forged enduring friendships with Native Americans and opened a trading post in 1912. His first exhibition was in 1917 at the Museum of New Mexico in Santa Fe. Meyers was immortalized as the Indian trader Rodolfo Beyers in Frank Waters’ book on early-day Taos, “The Man Who Killed the Deer.” 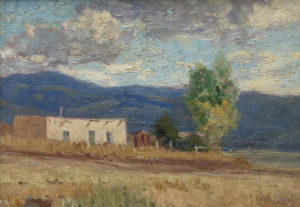 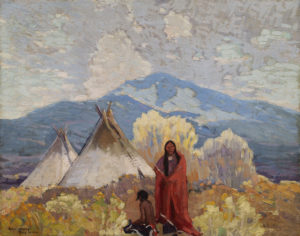 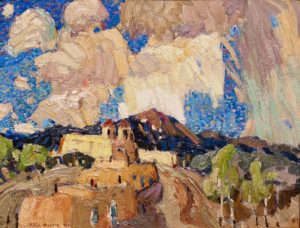