An early specialist in watercolor scenes of frontier life, Peter Rindisbacher is credited as being “the first pioneer artist recording genre of Western Indians.”  He was born in the Emmenthal Valley in Switzerland and received some art training before moving to western Canada with his family in 1821. There they joined a colony on the Red River settled by the Earl of Selkirk. During the trip, Rindisbacher sketched copiously, with subjects including landscapes, icebergs, and indigenous Canadians. During the five years he lived in the frontier settlement, he helped to support his family through the sale of drawings and watercolors that depicted frontier life. Around 1822-23, the colony’s governor, Andrew Bulger, asked him to sketch some of the British forts in the area. These works brought him attention in England, where some of the scenes were lithographed.

The Rindisbachers moved south into Wisconsin in 1826, having been driven out of Canada by severe weather and other trying circumstances. In 1829, they settled in St. Louis, Missouri, where Peter did magazine illustrations of Western scenes for “The American Turf Register” and “Sporting Magazine.” In 1829, just before the move to St. Louis, Indian Commissioner Caleb Atwater hired him to record an Indian treaty gathering in Wisconsin at Prairie du Chien. Peter Rindisbacher died in 1834 at age twenty-eight, just when he was gaining national attention for his work. 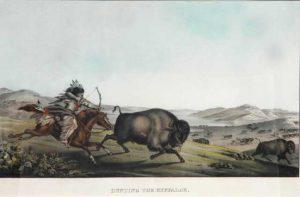