Peter Moran arrived in the U.S. at the age of 3, the youngest of the four Moran brothers. Upon concluding his formal education in Philadelphia, he was apprenticed in 1857 to Herline and Hersel, lithographic printers. Shortly thereafter, he became a pupil of his brothers Edward and Thomas in their Philadelphia studio. He maintained his studio in Philadelphia for the rest of his life, making his mark as a competent and prolific etcher. In addition to his art, he was said to have been involved in the theater as a scene painter and sometime actor.

Peter Moran traveled to the American West in 1864, a trip that included New Mexico. Later, Peter accompanied his brother Thomas on an excursion to the Grand Tetons, in 1879. They took the Union Pacific train west to Donner Pass, then traveled south and east to the Teton River. Peter was also with Captain Bourke on the ethnographic trip to Native American pueblos in New Mexico and Arizona in 1881, as mentioned in “The Snake-Dance of the Moquis of Arizona.” In 1890, Peter Moran took a job as a special agent for the government. His report of the census, entitled “Indians Taxed and Indians Not Taxed,” included three illustrations by Peter Moran on the Shoshone Agency in Wyoming.

We buy works by Peter Moran 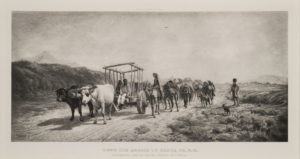 Down the Arroya to Santa Fe, N.M.