Maurice Sterne was an ardent world traveler, producing a diverse and experimental lifetime of work in which he explored various styles and techniques. Sterne mixed his traditional art training with geometric and stylistic elements, and painted subject matter from destinations like Egypt and India. The artist began his painting career with figural works that delved into cultural rituals witnessed during his travels to India and Indonesia. By the end of his career, he painted New England seascapes using vivid colors and freer paint application. Sterne was also a sculptor, printmaker, and muralist and produced works for the New Deal commission program.

Sterne was born in Latvia in 1878. At the age of twelve his family immigrated to New York and, starting in 1894, he began studying at the National Academy of Design. Sterne received the Mooney Traveling Scholarship at school and traveled to numerous places, including France and Germany. Artists like Paul Cézanne and Paul Gauguin influenced Sterne.

Sterne’s accomplishments include a National Fine Arts commission from President Truman. He was the first American to have a one man exhibit at the Museum of Modern Art, and he was also an educator at the California School of Fine Arts. Today, much of his art belongs to the Phillips Collection, in Washington D.C. 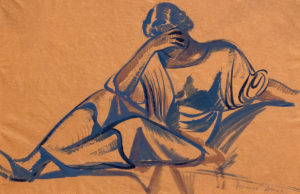