Admired for her detailed etchings of landscapes, Mary Nimmo Moran was born in Strathaven, Scotland, in 1842. Her family immigrated to the United States in 1852 and settled in Crescentville, Pennsylvania, next door to the Moran family. Beginning in 1860, Mary studied at the Pennsylvania Academy of the Fine Arts. Thomas Moran was her professor and not long after they got married. Thomas continued to serve as Mary’s mentor, teaching her to paint using watercolor and oil. Mary continued to work on a grand tour of Europe in France, Italy, and England. She also learned to etch, which became her defining medium, one that would bring her prominence. Her favorite subject matter was of Newark, New Jersey, and East Hampton, New York. She is known for her meticulous attention to atmospheric changes and weather conditions in her art.

Her husband was so impressed with her plein air etchings that he submitted them to the New York Etching Club, to which she was elected a member. She also joined the Royal Society of Painter-Etchers in London, where she was the only female member. Mary exhibited at the National Academy of Design, the Society of American Artists, and the Pennsylvania Academy of the Fine Arts. 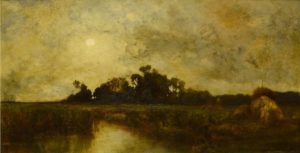