Louis Akin was born and raised in Portland, Oregon, after his grandparents followed the Oregon Trail from Iowa in 1852. The aspiring artist worked initially as a sign painter, saving for a move to New York, where he studied with such well-known artists as William Merritt Chase and Frank Vincent DuMond.

Akin arrived in the Southwest in 1903 after William Haskell Simpson, the chief of the advertising department for the Santa Fe Railroad, offered him transportation to Arizona in exchange for a commitment to paint scenes of the Hopi Indians. Akin eagerly accepted, and for many months he rented a room at the Hopi Pueblo of Oraibi, learning the language and dressing in Hopi manner. These works garnered critical and economic success for the artist, who continued to work in Arizona for several years.

Later, Akin received an important commission to paint a series of panels at the American Museum of Natural History in New York. However, in the middle of the project he became ill. Akin died before the series could be completed. 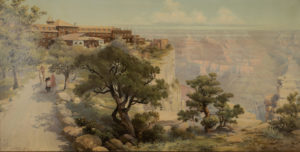