From St. Paul, Minnesota, Lloyd Moylan was a painter who specialized in Southwest Native American subjects. He was also a museum curator and muralist whose work is in the Museum of New Mexico and the Penrose Public Library. Moylan studied at the Minneapolis Art Institute, the Art Students League in New York, and the Broadmoor Art Academy in Colorado Springs. From 1929 to 1931, he taught at the Broadmoor Academy, and he later became curator of the Museum of Navajo Ceremonial Art in Santa Fe (now, the Wheelwright Museum of the American Indian). From the time he attended the Broadmoor Academy, he made numerous trips into Arizona and New Mexico, where he sketched and painted the Hispanic and Native American population. 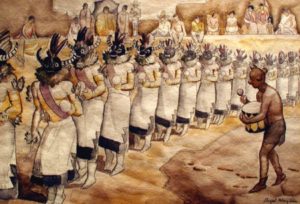