Born in 1838 and raised in France, Léon Trousset was a talented itinerant artist who immigrated to America and became known for his paintings of landscapes, architectural and historical scenes, and city views.

Primarily known for working in northern California, Trousset befriended California artists Jules Tavernier and Julian Rix, and was regarded as one of the bohemians of the Monterey Peninsula. He was briefly an important personage in the fledgling art colony. He traveled up and down the California coast, journeying to many destinations in Mexico, as well.

Between 1885 and 1886, Trousset traveled throughout Texas and New Mexico, producing landscapes and architectural scenes of El Paso, Texas and Albuquerque, Mesilla, and Socorro, among other New Mexico towns. Ultimately, Trousset settled permanently in Juárez, Mexico, where he resided until his passing. 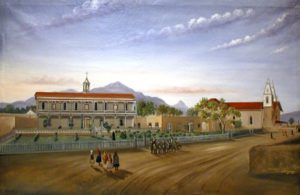