The last and youngest member of the Taos Society of Artists, Kenneth Miller Adams joined the Society in 1926, one year before the group disbanded. Born in Kansas in 1897, Adams studied at the Art Institute of Chicago and the Art Students’ League, before serving in the U.S. Army during World War I.

In contrast to the Taos artists, whose work was rooted in late nineteenth century academic principles, Adams was influenced by the Cubist style of Paul Cezanne and Taos artist, Andrew Dasburg. During the Depression-era 1930s, Adams worked for the U.S. Treasury’s Public Works of Art Program, creating murals for posts offices in Kansas and New Mexico. On receiving a 1938 Carnegies Corporation grant, Adams moved to Albuquerque, where he became the first Artist-in- Residence at the University of New Mexico.  He later became an instructor at the University, where he taught until 1963. In 1961, he was elected to the National Academy of Design.

Adams’ work is in the collections of the Smithsonian American Art Museum, the New Mexico Museum of Art, the Colorado Springs Fine Arts Center, the Anschutz Collection, and the University of Oklahoma’s Fred Jones Museum of Art.

We buy works by Kenneth Adams 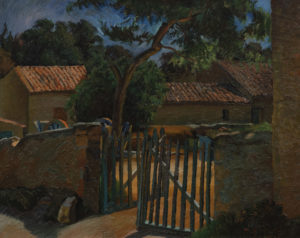 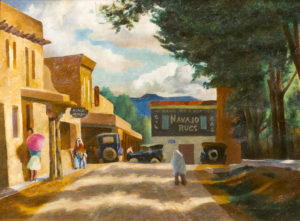