Born in Canandaigua, New York, John Mix Stanley became one of the most significant artists of the American frontier. He was also one of the most tragic, in that three separate fires essentially destroyed his lifetime’s work.

Stanley traveled and sketched on the Santa Fe Trail, in California during the Mexican War, and depicted the Native inhabitants of Oregon and the Northwest. He was the first non-Native American artist to travel to Arizona, arriving in 1846 as the draughtsman for the exploratory expedition of General Stephen Watts Kearny, whose mission was to help the United States secure California. Kit Carson was the expedition’s guide. Stanley’s duties were to depict the landscape through which they passed, and some of his subsequent studio paintings were among the first panoramic Western landscapes. By 1847, he was painting Native American portraits in Oregon and, in 1848-49, Polynesian portraits in Hawaii. In the end, he exhibited portraits of subjects drawn from forty-three tribes.

In 1852, one hundred fifty of these paintings were loaned to the fledgling Smithsonian Institution, with the hope of selling them to the U.S. government in return for his expenses and ten years of work. But Congress refused and they remained in the Smithsonian, where they were destroyed by fire in 1865. A second fire at P. T. Barnum’s American Museum, housing additional work, wiped out more paintings. After his death, a studio fire in Detroit destroyed most of his field sketches and later paintings. 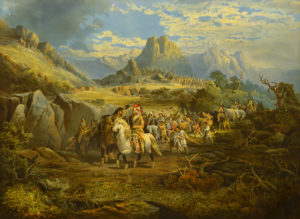 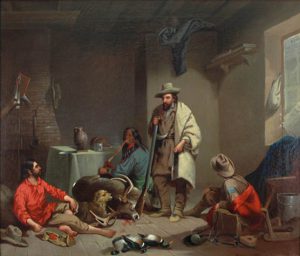 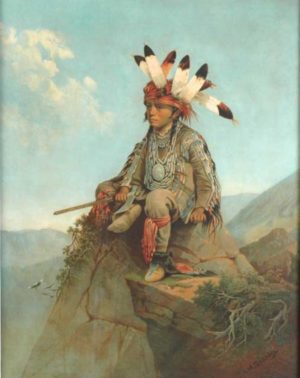