Declared “the most outstanding individual of the year” by the American Historical Society for Artistic Achievement in 1938, Jane Peterson challenged the prejudice existing in America against female artists. Her style drew from Impressionist, Expressionist, and Fauvist art movements, and depicted scenes of the seaside, parks, crowded streets, and especially flowers. Peterson’s signature style encompasses the use of large masses of rich, vivid colors with bold outlines to emphasize emotion and light. She was drawn to subject matter in Italy and France.

Peterson left her hometown of Elgin, Illinois, and attended the Pratt Institute of Design in New York City, in 1895. She was an inexhaustible painter and world traveler, and as a result was acquainted with John Singer Sergeant, Gertrude Stein, Henri Matisse, and Pablo Picasso. Peterson was successful, exhibiting in over one-hundred shows between 1910 and 1930, including “L’tteroique et le Quotidien: Les Artistes Americains, 1820-1920” and “Museé d’Art Americain Giverny, France.” During her career she taught at several art institutions and belonged to numerous professional associations, such as the Allied Artists of America and the Watercolor Society. In 1965, Peterson passed away leaving behind a sizeable collection of work represented in permanent collections, most notably in the Metropolitan Museum of Art in New York City. 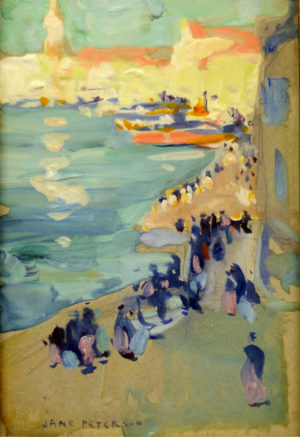 The Schiavoni with Sunshine, Venice