Houghton Cranford Smith had become a highly regarded artist by the 1940s, with an extensive exhibition record at museums and galleries throughout the country, including six consecutive years at the Carnegie Institute’s invitational exhibition.

Early art training in New York at the Pratt Institute and Art Students League, and in Provincetown at the Cape Cod School of Art, provided Smith with a traditional foundation leading him toward Impressionism, the popular style of the day. However, his work changed dramatically around 1930, after studies in Paris at the Académie Julian and Académie de Montparnasse. When he returned to the U.S., his paintings displayed a new style, characterized by layers of fastidiously applied brushstrokes overlying strong geometric arrangements.

Though New York was his home base, Smith traveled extensively throughout his career. He spent time in Taos, New Mexico, painting and exploring the region with artist friends Victor Higgins, Buck Dunton, and Bert Geer Phillips.

Smith’s works are included in the collections of New York’s Metropolitan Museum of Art, the Harwood Museum of Art, Taos, New Mexico, and The Butler Institute of American Art, in Youngstown, Ohio. 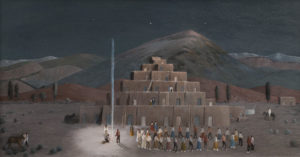