Known for his New Mexico landscape paintings, Helmuth Naumer worked in pastel, watercolor, and oil. Naumer loved pastel the most, however, because he didn’t have to mix the paints or worry about the color fading with time. For him, pastel was the most effective for catching fleeting changes in atmosphere in the Southwest landscape. His paintings are generally composites of landscapes and not realistic depictions of a particular place.

Naumer grew up in the small town of Ruetlingen, Germany, in the Black Forest. As a youngster, he loved the cowboy and Indian lore of the American West, inspired by the writings of the author Karl May. In 1925, at age seventeen, he immigrated to New York City. From there he went West, stopping briefly in Santa Fe on his way to California. He enrolled in the Frank Wiggins Art School but, needing steady income, joined the Merchant Marines. After six years at sea he returned to Santa Fe, where he settled permanently in 1932. Naumer became friends with artists in the local community and began painting landscapes with them, earning a good reputation in that area as well as in other parts of the country. 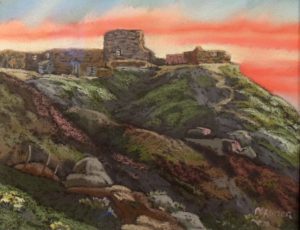