Born in Philadelphia, Pennsylvania, Harry Hutchinson Shaw attended both the Cleveland Institute of Art and Ohio University, where he earned his Master’s degree in art. After graduating, Shaw was hired to establish an art department at Ball State University in Indiana, and then returned to Ohio to teach at Miami University. He went on to teach for twenty years at what is now the University of Louisiana at Lafayette, before moving permanently to Florida.

While Shaw was not one of the many artists who chose to take up residence in New Mexico, he traveled to the southwest on several occasions, and his subject matter included the desert and mountain landscapes of New Mexico and Arizona. His work is included in the collections of the Library of Congress, and the Akron Art Museum and the Canton Museum of Art, both in Ohio. 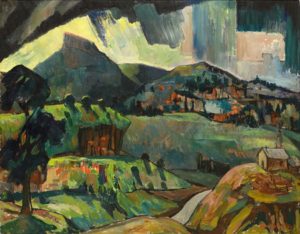