Edgar Paxson is admired for his ability to capture the essence of Montana in the late-nineteenth century. Born in 1852 in the small town of East Hamburg, New York, Paxson had no formal art education but worked as a painter at his father’s carriage business.

At the age of twenty five, Paxson moved to Deer Lodge, Montana and became immersed in the culture of the West. The new setting inspired his art. To support himself, Paxson worked as a commercial artist, painting sets and signs. On the side he continued to pursue his dreams of being a painter of fine art. His go-to media were oil and watercolor. At this time, the artist produced his defining work, titled “Battle of the Little Bighorn,” based on the fight between the Lakota and Arapaho tribes and the United States Army. Paxson fervently researched the event for accuracy.

Alongside his career as a painter, Paxson was also a successful muralist. He received numerous commissions, including a series of murals of Montana history for the State Senate chambers in Helena, Montana, and eight murals depicting the Lewis and Clark expedition for Missoula County. 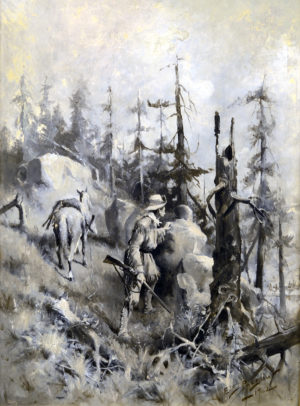