Born in Rock Island, Illinois, by the age of twenty-one Charles Graham was working as a topographer for the Northern Pacific Railroad survey of Montana and Idaho. Afterward, he began work as a scenery painter for theaters in Chicago and New York, until landing a position as a staff artist for Harper’s Weekly. From 1877 to 1892, he created a variety of images which appeared regularly in the magazine. Assignments during the 1880s took him to the American West where he produced over one hundred works, including scenes detailing the completion of the Northern Pacific Railroad in western Montana in 1883, the Yellowstone region in 1887, and New Mexico and the Dakotas in 1890.

After leaving Harper’s Weekly, Graham became an independent artist, producing both commercial illustrations and easel paintings in a variety of locations around the country. From 1893 to 1896, he worked primarily in the San Francisco area. He became a member of the the Bohemian Club and the San Francisco Art Association, which exhibited his work for many years. While in New York, Graham’s paintings were frequently on display in exhibits of the American Watercolor Society. 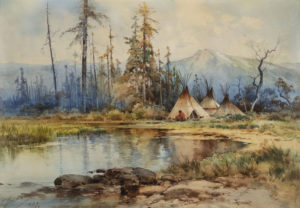 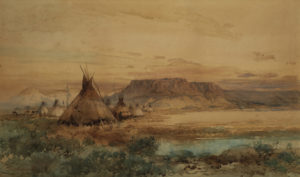 Nomades of the Wild West