Catharine Critcher was not only an innovative painter but also a leader for women in the art world. She was the only woman elected to the Taos Society of Artists and was the founder of two art schools. She painted landscapes, flowers, and figurative pieces, but is most widely known for her portraits.

Critcher was born to a wealthy family in Westmoreland County, Virginia, in 1868. She studied at The Cooper Union in New York City and at the Corcoran School of Art in Washington D.C., where she would end up teaching later in her life. She began her art career as a formal portrait artist of distinguished easterners. When she traveled to Paris to study at the Academie Julian, she stayed on to establish the Cours Critcher art school. It was a stepping stone for American students who had trouble learning French but wanted to study in Paris. During this time she worked as a tour guide for the Grand Tour of Europe, was the president of American Painters in Paris, and exhibited at the celebrated Paris Salon. Critcher traveled extensively, painting in countries such as Canada, France, and Mexico. In 1924, she founded the Critcher School of Painting and Applied Arts in Washington D.C. with an artist friend, Clara Hill.

During a visit to Taos, New Mexico, in 1922, Critcher fell in love with the Southwest and declared, “Taos is unlike any place God ever made.” She was elected a member of the Taos Society of Artists, in 1924, a great honor for any artist, but monumental for a woman at that time. While in New Mexico, she stayed at the Hopi Reservation for two months. The portraits she produced were her most outstanding. Critcher died in 1964, leaving behind a life full of numerous accomplishments.

We buy works by Catharine Critcher 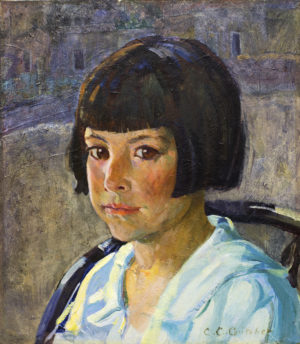 Portrait of an Indian Girl