American painter and printmaker Beulah Stevenson was a native of Brooklyn Heights, New York, where she lived and worked for her entire life. She studied at two of New York City’s most renowned art schools, Pratt Institute and the Art Students League, where her mentor was the influential American painter, John Sloan. Stevenson also spent time in the art colony of Provincetown, Massachusetts, where she studied with Hans Hofmann.

Sloan, himself a regular visitor to New Mexico, invited Stevenson to visit one summer, and she became another of the many artists who returned repeatedly to the Southwest, inspired by the dramatic landscape. Her paintings are characterized by vigorous brushwork and an expressive use of color.

Stevenson’s professional ties to the art world were numerous: she was president of the New York Society of Women Artists, vice-president of the Brooklyn Society of Artists, and she was a board member of the National Association of Women Artists. Stevenson spent many years as a curator at the Brooklyn Museum of Arts, and her work is part of its collection and that of the Library of Congress. 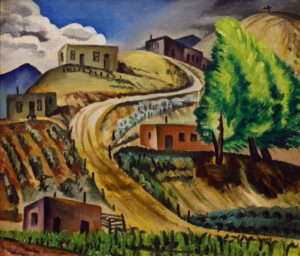