An enthusiastic sportsman and lover of the outdoors, Arthur Fitzwilliam Tait adopted the Adirondack Mountains in northern New York as his spiritual and aritistic home. He was one of a few 19th-century artists who lived in the region for an extended period. He delighted in observing and recording deer, bear, grouse, and other wildlife in their native habitat. Over several years, Currier & Ives printed lithographs of some three dozen paintings by Tait, including hunting and fishing scenes, and also images of the American West. 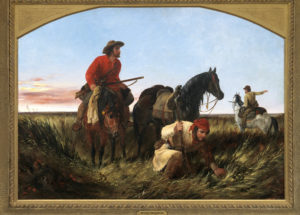 Trappers Following the Trail: At Fault