In July of 1917, the renowned “quasi photographic” artist, Andrew Wyeth, was born in Chadds Ford, Pennsylvania, into the Wyeth dynasty of artists. Remarkably, Wyeth never studied at an art school or travelled to Europe for his art. Instead, he was trained by his father, the celebrated Newell Convers (N.C.) Wyeth.

Andrew Wyeth’s main subject matter was the Brandywine Valley in his hometown of Chadds Ford and the Port Clyde area of Maine. In 1937, at the age of 19, he had his first one-man show at the Macbeth Gallery in New York. He is known for his series of the Olson family and their estate in Maine. His other notable series were of the Kuener family in Pennsylvania and of a German immigrant named Helga Testorf. In these works, Wyeth used either watercolor or tempera to depict desolate scenes of nostalgic, lonely figures or landscapes using photo-realism and unusual perspectives.

Awards from the Philadelphia Museum and the Pennsylvania Academy of the Fine Arts, among others, exemplify Wyeth’s success. Another noteworthy honor was the Presidential Medal of Freedom presented by John F. Kennedy in 1962. Wyeth held a one-man exhibit in 1970 at the White House and, in 1976, he was the first ever American-born artist to have a retrospective exhibition at the Metropolitan Museum in New York City. 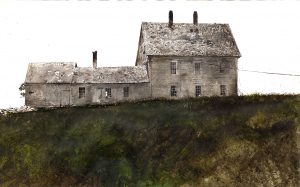 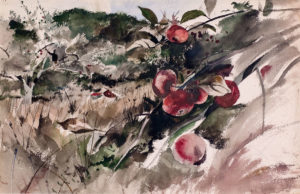