Alice Schille, a Columbus, Ohio native, was born to a wealthy family, a fortunate circumstance that allowed her to travel widely to hone her painting technique. Schille attended the Columbus Art School in 1891, and later at the Art Students League of New York where she studied with American painters William Merritt Chase and Kenyon Cox. In 1894, she traveled to Europe, supplementing her studies in Paris with travels to exotic locales like Morocco and Egypt, among others.

Schille was renowned for her Impressionist and Post Impressionist paintings, and she was also known for her versatility in painting styles. She was influenced by the Dutch Old Masters, James McNeill Whistler, the Fauves, and Mexican muralists.

Schille first visited Santa Fe in the summer of 1919, returning in 1920 for a one-woman exhibition of watercolor paintings at the New Mexico Museum of Art. Later that year, she exhibited at the Museum’s annual Fiesta art show. Schille continued to travel to Santa Fe sporadically into the 1930s, and her work can be found in numerous permanent art collections, among them the El Paso Museum of Art, the Indianapolis Museum of Art, and the Fine Arts Museum of San Francisco. 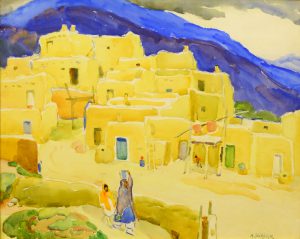