An American artist and a Hudson River School painter, Thomas Worthington Whittredge was born in a log cabin in Springfield, Ohio. He began painting landscapes and portraits at an early age, ultimately traveling abroad to study at Germany’s Dusseldorf Academy with Emanuel Leutze. In Dusseldorf, Whittredge befriended famed landscape artist Albert Bierstadt, and in an interesting twist, posed as George Washington for Leutze’s famous painting, “Washington Crossing the Delaware.”

In 1865, Whittredge journeyed west, crossing the Great Plains to the Rocky Mountains, and his work showcased the stark beauty and low-lying horizons of the American West. In his autobiography, he noted that, “Whoever crossed the plains at that period, notwithstanding its herds of buffalo and flocks of antelope, its wild horses, deer and fleet rabbits, could hardly fail to be impressed with its vastness and silence and the appearance everywhere of an innocent, primitive existence.”

Highly regarded as a landscape painter in his time, Whittredge served as the President of the National Academy of Design, and his work is in numerous museum collections, including the Metropolitan Museum of Art and the Smithsonian American Art Museum. 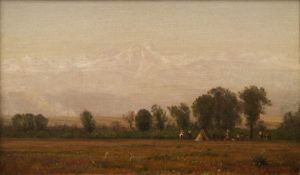