Born in Middletown, Connecticut, William Ranney devoted his career to depicting the West. As a young man, he apprenticed to a tinsmith in Fayetteville, North Carolina, having abandoned his study of art in New York City after the death of his sea captain father. To find adventure, in 1836 Ranney joined the Texas army in its fight for independence against Mexico. This brief period was his only experience on the frontier. It is likely that he met trappers on this venture, as several of his most popular paintings, including “The Trapper’s Last Shot,” were based on a rowdy rendezvous with trapper Joseph Meek in Yellowstone Park.

Following this period of Western adventure, Ranney returned home to Brooklyn, working in and around New York City for the next ten years. In 1853, he moved his family to West Hoboken, New Jersey, and built a studio large enough to accommodate animals, including horses. The walls were decorated with Western paraphernalia, such as saddles, guns, and swords. 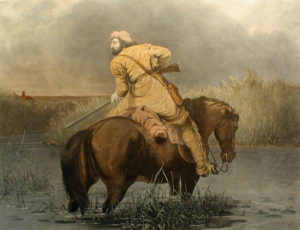