In 1906, at the age of 40, William Robinson Leigh boarded a train headed for New Mexico. There he would fulfill his lifelong dream to paint the American West. During the next fifty years, Leigh created hundreds of western paintings. He earned the title of the “Sagebrush Rembrandt” for his meticulous attention to detail, painstaking draftsmanship, skillful rendering of dazzling light, and unorthodox use of vivid color.

Leigh was born in West Virginia. From an early age, he longed to be an artist and his youthful works showed promise. When he was fourteen, he attended the Maryland Institute of Art in Baltimore and later enrolled at the Royal Academy of Art in Munich, Germany. In 1896, Leigh set up his studio in New York City and worked as an illustrator. After his first trip west in 1906, he returned repeatedly to pursue his favorite subjects: cowboys, Native Americans, outlaws, animals, and hunters. On each trip, he sketched hundreds of images, which he would later complete in his New York studio. Honors and accolades marked the last years of his life. Over time, W. R. Leigh, along with Frederic Remington and Charles M. Russell, came to be regarded as one of the three pioneers of American genre painting. 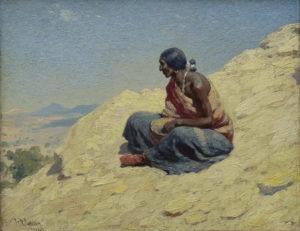 The Land of His Fathers