A native of Massachusetts, William Penhallow Henderson studied art, civil engineering, and comparative religion as a teenager, and these interests remained with him throughout his life. He furthered his art education at the Boston Museum School under the instruction of well-respected American Impressionist painter, Edmund C. Tarbell. From Tarbell, Henderson received rigorous training in the mechanical aspects of academic painting, the foremost being the technical principles of the European masters. As an accomplished art student, Henderson received several scholarships for travel and study in Europe. Upon his return to the United States in 1904, Henderson accepted a teaching position at the Academy of Fine Arts in Chicago, where he became one of the city’s foremost artists, with frequent exhibitions at the Art Institute.

In 1916, Henderson’s wife, poet Alice Corbin, was diagnosed with tuberculosis, and the Henderson family arrived in Santa Fe, where she was treated at Sunmount Sanatorium while Henderson and their daughter live nearby. Henderson established the Pueblo-Spanish Building Company with his son-in-law in 1925, and they designed and built private homes and public buildings, including the Railroad Ticket Office in the Santa Fe Railyard; they also had success creating carved wooden furniture. In the mid-1930s, he was appointed to the Federal Arts Project, for which he completed easel paintings and murals for the Santa Fe Federal Court Building. He also finished the six WPA murals begun by fellow artist Gerald Cassidy for the U. S. Courthouse in Santa Fe, following Cassidy’s sudden death.

In 1937, at the behest of Mary Cabot Wheelwright, Henderson designed a uniquely memorable building for what was called the Navajo House of Religion, built in the traditional style of a Navajo Hogan; it is now known as Santa Fe’s Wheelwright Museum of the American Indian. 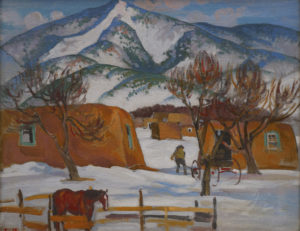 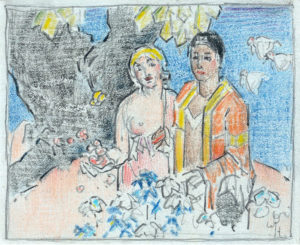 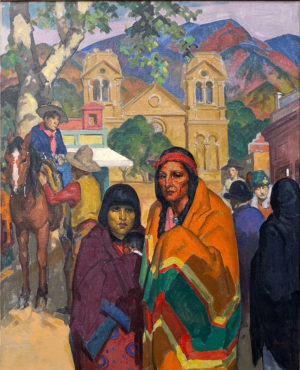