An American painter born in 1878 in Pierce City, Idaho, Elling William Gollings drew on his own life to create paintings that accurately depicted life in the Old West. As a boy, he spent time in New York, Michigan, and Illinois in addition to his Idaho birthplace. At 19, Gollings traveled through small mining and ranching communities in South Dakota, Nebraska, and Montana, where he worked as a shepherd and cowboy.

Although he supported himself through ranching, Gollings had an interest in art from an early age. After starting to create with a set of mail-order paints, he was admitted to the Chicago Academy of Art. On moving to Wyoming, he continued to pursue his artistic interests, eventually becoming proficient in etching. In 1909, Gollings built a studio in Sheridan, Wyoming, and devoted himself to painting Western scenes, aided by a lifetime of personal involvement in his subject matter.

Gollings’ works are displayed in American institutions such as Oklahoma’s Gilcrease Museum, the Buffalo Bill Historical Center in Cody, Wyoming, and the National Museum of Wildlife Art, in Jackson Hole, Wyoming. 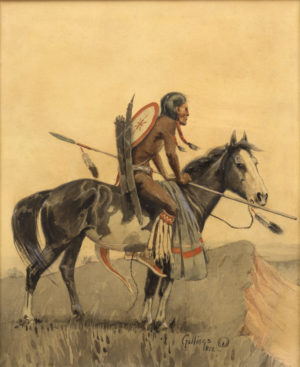