William de la Montagne Cary was a highly regarded painter and illustrator, known for his dramatic depictions of the West—much of it inspired by his own experiences. As a young man, Cary undertook an adventurous nine-month trek in 1861. With two friends, he journeyed by boat along the Missouri River and overland to the Pacific coast. Keen to see and visit with Native American tribes, as well as frontiersmen and traders, Cary was also driven to create on-the-spot sketches that would serve him for years to come.

A lifelong New Yorker, Cary began his career at 14 as an engraver’s apprentice. He honed his skills as a draftsman, while also gaining proficiency in oil and watercolor painting. Soon his work was sought by Harper’s Weekly, Scribner’s Magazine, and Currier & Ives. The success of his illustrations allowed him freedom to create paintings for exhibition and sale to collectors, of which there were many. In 1874, Cary traveled west again, joining the Northern Boundary Survey during their work in the northern plains. On this trip he completed assignments for Harper’s Weekly and created numerous sketches in oil and pencil, which provided materials for subsequent illustrations and easel paintings.

Cary’s works are in the collections of the National Gallery of Art, the Gilcrease Museum, the Amon Carter Museum, and the Joslyn Art Museum. 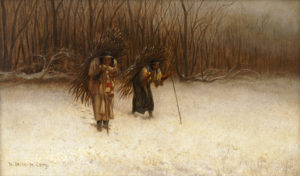 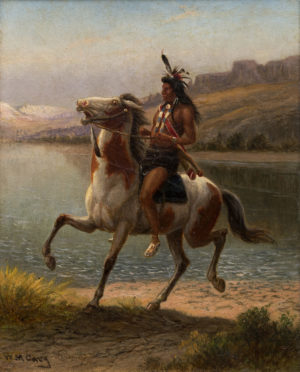