For many American-born artists in the early decades of the twentieth-century, New Mexico provided an exciting alternative to the more academic training available in Europe. Willard Nash was born in Philadelphia, trained in Detroit, and moved to New Mexico in 1920. One of the five young painters known as “Los Cinco Pintores,” Nash was very attracted to modernism. His work shows the influence of modernist Andrew Dasburg, with whom he studied in New Mexico. Like Dasburg, Nash believed that form and color in painting took precedence over the depiction of the object. While studying with Dasburg, he experimented with the techniques of Cezanne, whose cubist approach to the landscape made a lasting impression. His devotion to the architectonic structure of Cezanne in the thirties and to abstraction in the forties marks Nash as one of the more daring of New Mexico modernists.

We buy works by Willard Nash 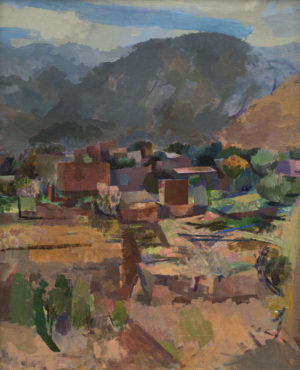