An Indiana native, artist Stuart Walker studied at the Herron School of Art, now the Indianapolis Museum of Art, and he began his painting career by working in a naturalistic style. Upon moving to Albuquerque, Walker was drawn to the New Mexico landscape and the distinctive forms that characterize the region’s architecture. His work also included depictions of the flora and fauna, as well as the native residents of the state, and his style eventually became more abstract.

As the Transcendental Painting Group formed in Albuquerque, New Mexico, Walker became one of the first members, along with another notable transcendentalist painter, Raymond Jonson. Both artists were intrigued by the use of rhythmic forms, and Walker’s obvious avoidance of any reference to his formerly naturalistic style was amplified by his use of anonymous titles for his paintings.

His life, and as a result, his artistic output, was limited by its brevity, but his work can be seen at the University of New Mexico Art Museum. 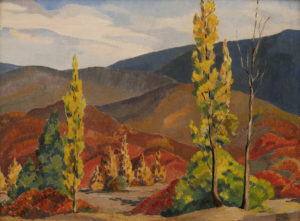