A successful artist in New York City during the early 1900s, Sheldon Parsons painted the portraits of such important American figures as President McKinley and Susan B. Anthony. The death of his wife and a severe case of tuberculosis drove him west in 1913 with his young daughter, Sara.

Following his recuperation in Santa Fe, Parsons decided to remain in the fledgling city, becoming one of Santa Fe’s first resident artists. Inspired by the color and light of his new home, Parsons turned his Barbizon and Impressionist training to the northern New Mexico landscape in all of its limitless variation. He masterfully recorded the unique character of Santa Fe neighborhoods and nearby Pueblos, as well as the expanse of the desert and mountains. After the New Mexico Museum of Art opened in 1917, Parsons was appointed as its curator of exhibits. With this position he became an advocate for both local and visiting artists, and helped Santa Fe develop into one of this country’s most vibrant art communities.

We buy works by Sheldon Parsons 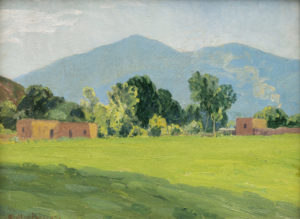 Spring in the Valley 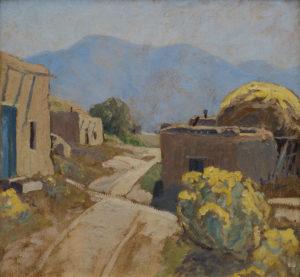 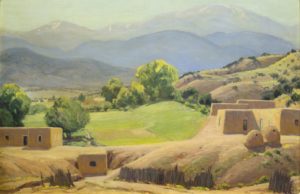