Eastman, who spent more time among the Native Americans of the trans-Mississippi West than probably any other artist of his day, was one of the few to record the ordinary activities of nineteenth century Native American life. Born in New Brunswick, Maine, in 1808, he was appointed to the U.S. Military Academy at West Point in 1824 where he trained as a topographical draftsman. He was assigned to duty on the western frontier and – possibly influenced by the visits of artists such as George Catlin – he produced some of his Native American studies, in 1829. In 1833, he was appointed assistant drawing instructor to Robert Weir at West Point. Five years later he exhibited at the National Academy of Design. Assigned to Fort Snelling, a United States military fortification located at the confluence of the Minnesota and Mississippi rivers, in 1841, Eastman made many studies of frontier and Native American scenes.
Seth Eastman was the principal illustrator for Henry Rowe Schoolcraft’s definitive study of the Native American and, after serving in Texas during the Civil War, was commissioned by Congress to execute a number of scenes of Native American and frontier life for the Senate and House Chamber at the Capitol. In addition to his work at the Capitol, Eastman’s paintings hang in the Smithsonian Institution, the Corcoran Gallery of Art, the Minneapolis Institute of Art, the Gilcrease Museum, the Stark Museum, and the Joslyn Museum of Art. 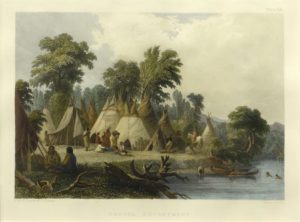 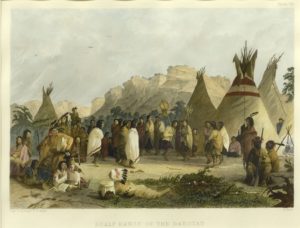 Scalp Dance of the Dakotas