Born in Illinois in 1896, Robert Riggs received a scholarship to The Art Students League, where he studied before moving to Philadelphia to work at an advertising agency. During World War I, Riggs served with a Red Cross unit and made numerous sketches of wounded soldiers, likely contributing to his later fascination with the subject matter. While in France, Riggs studied with fellow American artists at the Academie Julian, a private art academy in Paris. After the war, Riggs returned to Philadelphia where he worked as a freelance illustrator.

Known primarily for his distinctive prints, Riggs was highly productive during the 1930s, when the economic conditions of the Great Depression made prints particularly popular due to their low cost.

The artist was elected to associate membership in New York’s venerable National Academy of Design in 1939, with full membership following in 1946. In the early 1960s, Riggs taught at the Philadelphia College of Art (now, The University of the Arts). His work is highly regarded by lovers of printmaking. 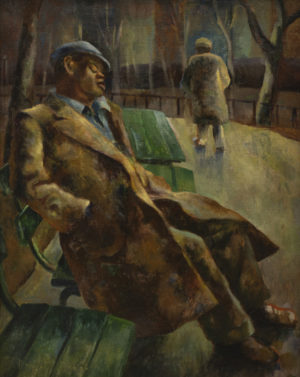