One of America’s most influential 20th century artists, Robert Henri was born Robert Henry Cozad in Spence’s Station, Ohio, in 1865. The Cozad family settled in Nebraska, where his father, unfortunately, killed a local rancher during an argument, forcing the family to relocate in Atlantic City, New Jersey under a new name. Young Robert Henri attended boarding school in New York City, followed by art studies at the Pennsylvania Academy of Fine Art and in Paris at the Academie Julian and L’Ecole des Beaux Arts. Upon his return to the U.S., Henri formed a seminal artists group known as The Eight, and he ultimately became known as the leader of an urban realist movement called the Ashcan School of Art. The Ashcan aesthetic revolved around the rapid and momentous changes taking place in urban life and culture, rendered via a dark palette and vigorous brushwork.

After the 1909 founding of the Henri School of Art in New York City, the artist spent the summer of 1914 in San Diego where he served as coordinator of an art exhibition for the Panama-California Expo. During the summers of 1916 and 1917, Henri traveled to Santa Fe to paint, quickly becoming an important figure in the local art scene. In 1917, he was recruited to advise on the city’s new art museum, advocating for a more open exhibition policy. Henri persuaded fellow artists George Bellows, John Sloan and Randall Davey to come to Santa Fe, and in 1918 he was elected as an association member of the Taos Society of Artists. A giant in American art, Henri died of cancer in New York City on July 12, 1929.

We buy works by Robert Henri 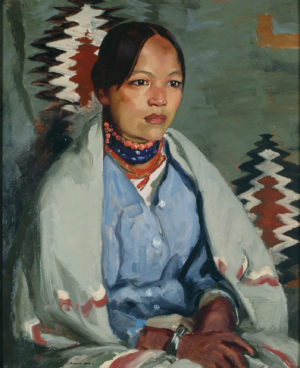