Born in Rochester, NY, Robert Gribbroek studied at a variety of art institutions, among them, the Rochester Institute of Technology, the Pennsylvania Academy of Fine Arts, and the Art Students League in New York City. He began his working career as a commercial art director for an advertising agency in Rochester and from 1934-35, he was employed as the Art Director for the Rochester Museum and Science Center.

Gribboek first traveled to New Mexico in 1929, and in 1936, he moved to Taos where he continued his studies at the University of New Mexico field school in Taos and with painter Emil Bisttram at his Taos School of Art. Through Bisttram, he met husband-and-wife artists Horace Towner Pierce and Florence Miller Pierce, with whom he became involved in the Transcendental Painting Group (TPG), New Mexico’s pioneering group of painters dedicated to abstraction.

Gribboek returned to commercial art to make a living, working as a technical illustrator for Douglas Aircraft, as a layout artist for Disney Studios, and ultimately for Warner Bros. Studios as a Studio Art Director. While Gribboek was not highly celebrated as an artist in his day, many cartoon lovers were fans of his work, and he remained active in the New Mexico art scene throughout his career 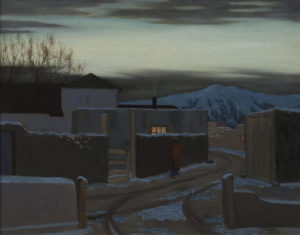 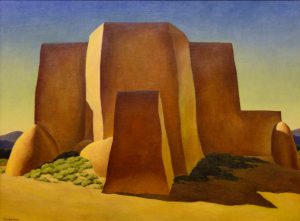