Robert Daughters, “a tireless, compulsive painter,” is known for his vibrant depictions of the Southwest. His work is notable for the painterly brushwork, bold outlines, and use of alternating extreme lights and darks to emphasize movement and light.

Daughters was born in St. Joseph, Missouri, in 1929. He attended the Kansas City Art Institute and School of Design. Having always been an enthusiast of the Southwest, Daughters visited New Mexico with his family and soon after moved to Taos in 1972. Working in plein air, his early work included more traditional charcoals of Native Americans as well as oils of New Mexican landscapes and Pueblo scenes. His style later evolved into a more Impressionistic approach. A noteworthy technique he used is termed “cloisonnism,” which is the rendering of blocks of jewel-like colors with outlines of black to represent form.

Daughters’ success is exemplified by the many awards he received, including several won at the New Mexico State Fair Show in 1972. His work has also been widely exhibited nationally and internationally, most recently in the “Covering the West — The Best of Southwest Art”, which traveled to several U.S. museums. 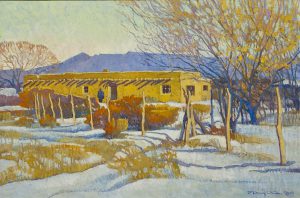