Richard Lorenz is recognized as one of the premiere artists of the western art genre. After immigrating to the U.S. in 1886, the German-born artist settled into the thriving German community in Milwaukee, Wisconsin, where his skills were soon in demand. But, it would prove to be the American West that most captured his imagination, and on which his legacy was cemented.

Lorenz made many trips throughout West, all the while training his eye on his subjects, and making sketches for paintings to be completed in his studio. He is known to have traveled to the Rocky Mountains, through the Southwest, California, and Oregon, and even rode a stint with the Texas Rangers.

During his lifetime, Lorenz exhibited widely. In Europe, his paintings appeared in major exhibitions in Antwerp, Berlin, Munich, and at the Paris Salon. In the U.S., his works were frequently included in exhibitions of American art at Chicago’s Art Institute, as well as at the international expositions held in St. Louis, Chicago, and San Francisco.

“Lorenz made visual images of his insights into and mighty love for the American frontier, the only place he was ‘truly happy.'”  – Margaret Fish: in “An Exhibition in Tribute to Richard Lorenz” catalogue essay for the Milwaukee Art Center 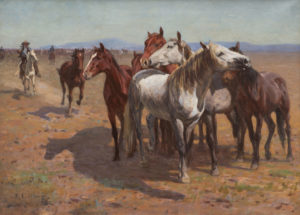