No stranger to the West, Raymond Jonson moved often during his childhood. His art training began at the Portland Art Museum School, and continued after his 1910 move to Chicago at the Academy of Fine Arts and the Art Institute. Encouraged by his teacher, B. J. O. Norfeldt, Jonson became the art director at the Chicago Little Theatre. His experimental stage designs and Bauhaus concepts influenced his painting, which took on distinctly abstract qualities in the twenties.

A 1922 summer visit to Santa Fe prompted Jonson’s permanent move to New Mexico two years later. For twenty-five years, he taught and painted in Santa Fe, producing rhythmic, sculpturally modeled landscapes, suggestive of a life force underlying the land. In the late thirties, he experimented with airbrush, collage, and spatter techniques. Jonson continued to work in an abstract mode after joining the University of New Mexico faculty in 1949. 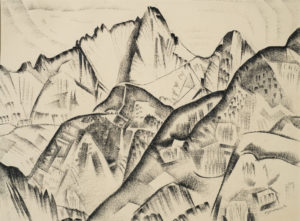 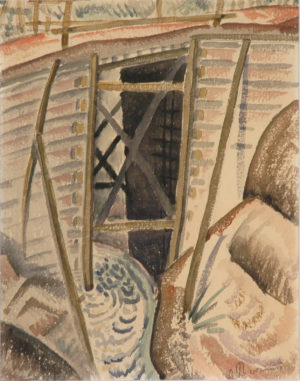