Philip Russell Goodwin studied art at the Art Students League in New York, the Rhode Island School of Design in Providence, and with famed illustrator Howard Pyle. In his early years he established a studio in New York City and met Charles Russell, whose paintings of Western subjects greatly influenced his work. It wasn’t long before he began receiving commissions, becoming a sought-after illustrator of Western scenes, including illustrations for “Call of the Wild” by Jack London and magazines such as the “Saturday Evening Post” and “Outdoor Life.” Through this work, Goodwin developed a keen and sympathetic eye for depicting life in the West. He often painted cowboys, hunters, and ranch life in a romanticized manner, in works noted for their dramatic settings and vivid colors. 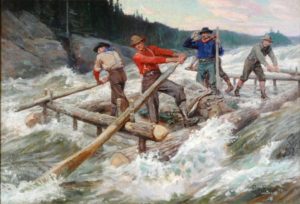