Admired as the first modernist painter in New Mexico, Paul Burlin moved to Santa Fe after exhibiting four drawings in the New York Armory Show at the request of William Glackens. Prior to this move the artist had studied at both the National Academy of Art and the Art Student’s League, initially finding work as an illustrator, and he was associated with the Ash Can School. Burlin also traveled to Europe, where he saw the avant-garde artistic styles being introduced to the American public at that time. In New Mexico, Burlin would play a pivotal role in the introduction of fauve and expressionistic modes to local art circles.

From 1913 until 1922 Burlin lived in Santa Fe, exhibiting at the New Mexico Museum of Art as well as several galleries in New York and Philadelphia.  During this time he experimented with abstraction. His highly simplified compositions, bold palette, and distorted forms show the obvious influence of Paul Gauguin and Henri Matisse, whom Burlin greatly admired. At the time this work was thought to be too radical by many, and Burlin returned to Europe for the next ten years. Despite living abroad he continued his friendships with many New Mexican artists, and is said to have influenced B.J.O. Nordfeldt and Marsden Hartley.

Today very few of his paintings have been identified or located. His work can be found in many collections, including the Museum of Modern Art, Whitney Museum of American Art, Los Angeles County Museum of Art, Denver Art Museum, U.S. State Department, and the Museum of New Mexico. 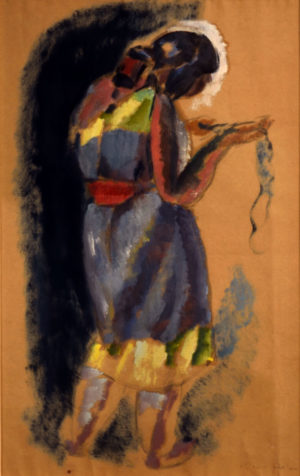