Known for her assemblage botanic depictions, Pansy Stockton used fragments of hundreds of different plant species as the medium in which she worked. Before settling on this unusual technique, Stockton worked in oil, watercolor, and tempera. Some of her pictures had as many as 10,000 components, and during her career she worked with 250 varieties of plants from all over the world. On the backs of some of these assemblages, she listed the items and where she found them.

Stockton was born in Eldorado Springs, Colorado. Her parents, David and Jennie Ferguson, ran the Grand View Hotel. She also spent time in Durango and Silverton, and later moved to Denver where she studied at the Cory School. As an artist in Colorado, she was known for her sun paintings and depictions of the Mount of the Holy Cross, the Spruce Tree House in Mesa Verde, and the Gateway to the Garden of the Gods.

In 1918, she married Roscoe Stockton, a public school teacher, and remained in Denver until 1941, when she became a resident of Santa Fe, New Mexico. There she was a student of Robert Graham, Adam Green Kerr, and Eliot O’Hara. She focused on Southwestern subject matter, including the Mission at Ranchos de Taos, Native American figures, and Old Tesuque Plaza. She married Howard Fatheree in 1950 and remained a resident of Santa Fe until her death. 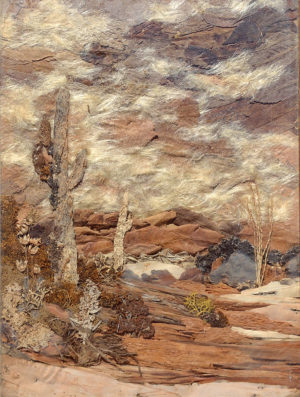 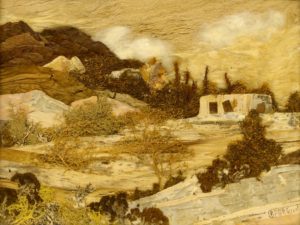 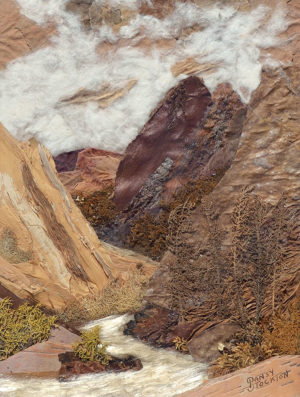 Where the Rio Flows