A chance week-long visit to Taos in 1899 led Oscar Berninghaus to make the isolated northern New Mexico village his summer home. By then, the 25-year-old St. Louis native was already a skilled illustrator. His formal training was brief, consisting of night classes at the St. Louis School of Fine Arts, and Berninghaus essentially taught himself how to bring the landscape and people of Taos to the canvas. His style was one of short, quick brush strokes, which gave his work a unique texture. Early in his career he painted on site, but later he worked from memory, which was described as being extremely accurate.

Berninghaus was one of six founders of the Taos Society of Artists in 1915, and he was deeply committed to the themes preferred by the artists involved in this organization. One reason was that he believed it was important to create a distinctly American art, something definitive of subject matter unique to this country. By the time Berninghaus settled in Taos permanently in 1925, he had achieved national acclaim for his masterful paintings of Southwestern life. 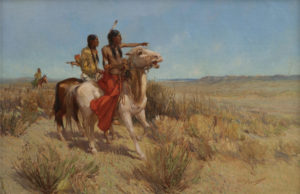 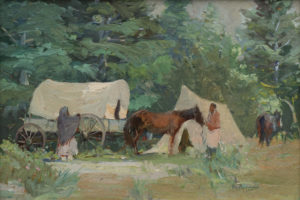 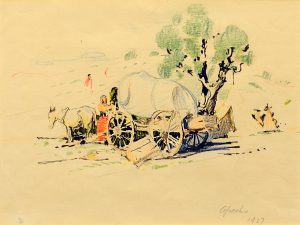