Famed muralist and painter Olive Rush was born in Fairmont, Indiana, in 1873. She is considered to be the forerunner for female artists in Santa Fe and Native American art education. Rush had a range of artistic interests, including stained glass and illustration. She was influenced by Asian art, Surrealism, and Abstraction. Native American, Hispanic, and animal subject matter with the use of pastel colors was prevalent in her art.

Rush studied at Earlham College and later Corcoran School of the Arts and Design in Washington D.C. In 1897, she moved to New York City and joined the Art Students League, while illustrating for “Scribner’s” and the “New York Tribune.” Amidst trips to Europe, Rush was accepted into juried exhibits including Carnegie and the Pennsylvania Academy of the Fine Arts. She visited New Mexico and Arizona in 1914, where she held a solo exhibition at the Palace of the Governors.

Enchanted with its unique culture and beautiful landscapes, Rush moved to Santa Fe, where she was commissioned by organizations such as the Public Works of Art Project (PWAP) to paint murals. She used these opportunities to support and teach female and Native American artists. Today her work is in the permanent collections of numerous museums including the Phillips Collection in Washington D.C. and the Delaware Art Museum. 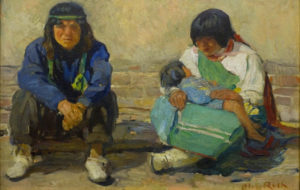