Known as the Dean of Western Art, Olaf Wieghorst was born in Viborg, Denmark, on April 30, 1899. Before his arrival in the United States at the age of 19, he was an accomplished horse rider, having been a stunt rider for a Danish circus. Arriving in the U.S., he used this skill to become a mounted patrol with the U.S. Cavalry, an officer in the New York City Police Department Mounted Division, and occasionally as a wrangler on ranches in the West. Wieghorst traveled the West extensively and, wherever he went, he eagerly sketched and painted, gathering material for his work. Prolific as an artist, he worked in oil, watercolor, bronze, copper etching, and pen and ink. Making numerous visits to Native American reservations, he was driven toward authenticity in every detail. Following the Remington/Russell tradition, Wieghorst based his art on his own experiences. His work is exhibited in major museums, including those in Phoenix, San Diego, Tulsa, Tucson, and the National Cowboy Hall of Fame. Wieghorst used the Quarter Circle 2C brand as his signature. 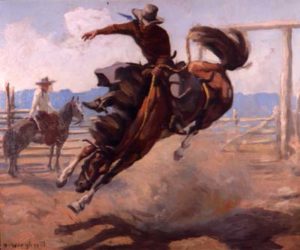