Trained in the style of the Hudson River School, Norton Bush’s paintings evoke both the majestic atmosphere and finely rendered detail of the natural world. His talent was recognized from an early age, having made his debut at the National Academy of Design at seventeen. Following the guidance of Frederic Edwin Church, he devoted his career to the landscape, and traveled extensively in order to render the spectacular scenery of the Americas.

A native of Rochester, New York, Bush voyaged to San Francisco in 1853, via Cape Horn. Visiting exotic locales of Central America along the way, he was inspired to capture the sights on canvas, and within the year he exhibited his tropical landscape paintings in San Francisco. With studios in San Francisco and later in Sacramento, Bush garnered a reputation as both a highly regarded California painter and artist of the tropics. 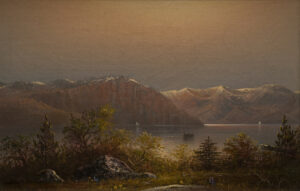